No 077 (2006): Graphic Novels and Young Adults
JavaScript is disabled for your browser. Some features of this site may not work without it. 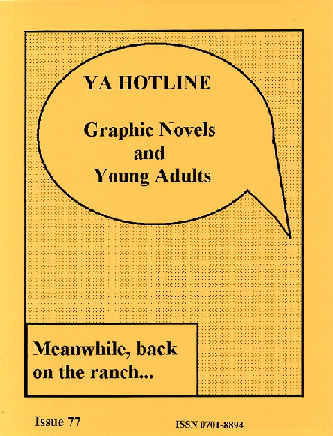 This YA Hotline is devoted to Comic Books and Graphic Novels. It is intended to help you, the reader, better understand their history and impact. It is intended to help you, the librarian, grasp the social, political, and practical implications of such collections. Finally, it is intended to help you, the educator, begin seeing such entertainment as teaching tools. Comic books are quickly developing and finding their place in schools and libraries, but have been in the hands of teens for quite some time. Less than a decade ago, the GN industry was on the brink of collapse. Interest and readership was at an all-time low, and even the biggest GN publishers were struggling with impending bankruptcy. Now, comics have been embraced by teens, each with varying genres and styles, and coming from many nations. Graphic novels are everywhere and influence other media. Many of the biggest blockbuster films being released originate from comic books. Cartoons and television shows are being produced that are either loosely or strictly based on comics. Manga-based cartoons are permeating the North American market. Novelized stories of comic book characters are popular reads. The graphic novel industry is feeding, and being fed by, every medium that is appropriate for young adults of any age. Subsequently, the industry is enjoying a brand new renaissance of compelling works. Labours of love, independent works, and mainstream series (which have become institutions of their own) are swarming the market. Now is the perfect time to bring teens and graphic novels together, and libraries are the perfect place to do it.