Artwork of Stephen Parrish and Charles Platt
JavaScript is disabled for your browser. Some features of this site may not work without it. 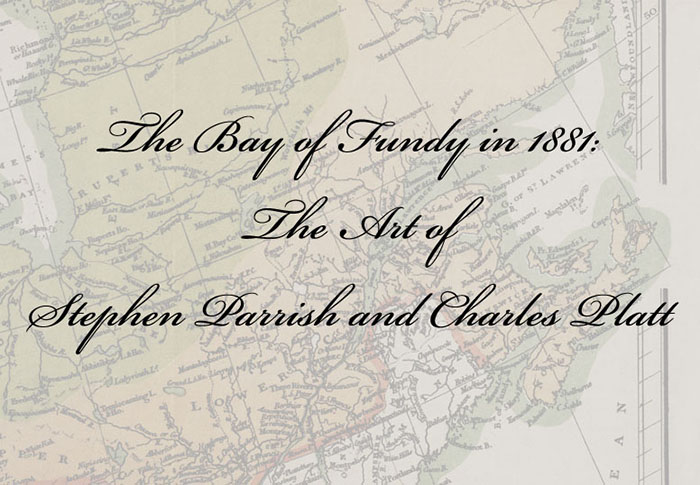 In the summer of 1881, American etchers Stephen Parrish and Charles Platt traveled through New Brunswick and Nova Scotia sketching the coastal and interior landscapes along the way. The two artists were captivated by the scenic Bay of Fundy and Annapolis Valley; Parrish created a number of preparatory sketches that later became the groundwork for a series of etchings of the Maritime provinces.


Stephen Maxfield Parrish (1846-1938) was born in Philadelphia into a wealthy Quaker family. In 1867, at twenty-one years of age, he spent two months travelling through Europe and it was during these travels that he discovered his love for art. Although Parrish had been exposed to painting during his school years, his primary occupation was in the coal industry and later on he owned a stationary store. In 1869 he married Elizabeth Bancroft (1849-1926) and together they had a son, Frederick Maxfield Parrish (1870-1966).

After one of his paintings was accepted by the Pennsylvania Academy of Fine Arts in 1867, Parrish decided to become a full time artist. Parrish decided to try etching after reading Etching and Etchers by British art critic, P.G. Hamerton. He was elected to the New York Etching Club in 1880 and became a founding member of the Philadelphia Society of Etchers later that same year. In 1881, he joined the Royal Society of Painters and Etchers in London. During a nine month period spanning from 1879 to 1880, Parrish completed forty etchings of settings that he encountered while travelling around the north eastern United States. Over the next five years Parrish would travel to the Maritime provinces and also return to Europe in pursuit of more subjects for his etchings. His work was exhibited in New York, London, Philadelphia, Boston, Vienna, and Montreal.

After the death of his brother Joe in 1893, Parrish left his home in Philadelphia and moved to Cornish, New Hampshire. Shortly thereafter Parrish left his etchings behind and began focusing on his paintings, yet his change in media was cut short when he suffered a stroke in 1926 and was left unable to paint. He died on 15 May 1938.


Charles Adams Platt, the son of John Henry Platt and Mary Elizabeth Cheney Platt, was born in 1861 in Manhattan. Although best remembered today for his landscape and country house designs, he was also well-known for his etchings, landscape paintings, and commercial architecture.

Platt enrolled in the National Academy of Design to study art in 1878. While vacationing in Bolton Landing, New York in 1879, Platt met Stephen Parrish, a printmaker who introduced Platt to the technique of etching. Informal lessons in etching continued the following summer when Platt vacationed with the Parrish family in Gloucester, Massachusetts. Platt was an avid student and developed his own distinct, flowing style.

In the late summer of 1881, Platt accompanied Parrish on his sketching tour of New Brunswick and Nova Scotia. He would produce at least three etchings based on the sketches he made during his trip. A year later, Platt travelled to Europe to study painting. During the 1880’s, he established himself as one of the foremost American printmakers and his etchings were particularly valued as book illustrations. He married Annie Corbin Hoe in 1886 but she died in childbirth in the spring of 1887, along with their newborn twin daughters. Grief-stricken, Platt recovered slowly, returning to his work by the summer of 1889 when he spent time at the Cornish Arts Colony in New Hampshire. After the collapse of the etching market in the early 1890’s, Platt turned his talents to architecture and had a very successful second career as an architect and garden designer. He married his second wife, Eleanor Hardy Bunker, in 1893 and they had five children. Charles Adams Platt died in Cornish, New Hampshire in 1933.